Violent Voices in Our Heads, Violent Books on Our Shelves by Guest Blogger Clark Lohr

T.M. Luhrmann, an anthropology professor at Stanford, wrote an opinion piece which appeared in the New York Times on September 19, 2013, concerning, in part, paranoid schizophrenics who have done mass shootings.  Culture has an influence on the voices—the commands—heard in the heads of paranoid schizophrenics.  Paranoid schizophrenics (note: it is a fact that mentally ill persons, as a class, are no more violent than the mainstream population) in the U.S. hear “greater violence” in their heads than do persons from other nations.

“We Americans live in a society in which, when people feel threatened, they think about guns. The same cultural patterns that make it difficult to get gun violence under control may also be responsible for making these terrible auditory commands that much harsher.”

I agree that it’s not enough for a mystery writer, or a crime writer, to say, hey, I just reflect society. In some cases, some work in our genre and its subgenres makes entertainment of what’s already in play in our society—or trivializes it.

What, then, is useful, or good, in the mystery/crime genre?  James Lee Burke wrote an introduction to Michael Connelly’s The Black Echo. The introduction, by Burke, and the book, by Connelly, are now both famous and valued—at least among those of us who write crime fiction:

“We forget sometimes that the genre begun by Edgar Allan Poe was actually a metaphor, at least for Poe, about the decay of Western civilization. James M. Cain once said that the premise of all his plots was the tragedy that befalls us when we eventually get what we want.  Of course, he was writing about the materialism and consumerism that drives the American economy. In effect, he was saying that the American dream is the American nightmare. The American crime novel, in effect, has become the sociological novel that has its origins with Theodore Dreiser, John Dos Passos, John Steinbeck, and James T. Farrell.”

Dennis Palumbo, formerly a Hollywood sitcom writer, now a licensed psychotherapist and crime fiction writer, said this in a Huffington Post blog (Through a Glass Darkly: Crime Fiction as a Window on American Culture):

“To feel the living, breathing essence of New Orleans, both pre- and post-Katrina, check out the Dave Robicheaux series by James Lee Burke. In a similar fashion, Tony Hillerman brought the Native Americans of the modern Southwest to life in his novels about Jim Chee and Joe Leaphorn. Just as Sara Paretsky’s V.I. Warshawski gave fictional heft to the idea of a strong female protagonist, and Walter Mosley’s “Easy” Rawlins gave us perhaps our most well-known African-American one.  Since its inception as a genre, crime fiction has both mirrored and commented on society’s often-tumultuous change.  It short, it told the truth about it.”

­­ — Clark Lohr is the author of two crime novels, Devil’s Kitchen and The Devil on Eighty-five. He lives in Tucson, Arizona. 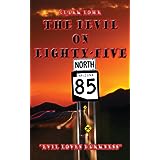 This entry was posted in Mar Preston. Bookmark the permalink.

One Response to Violent Voices in Our Heads, Violent Books on Our Shelves by Guest Blogger Clark Lohr

The Most Dangerous Species - A gruesome murder in a cat rescue sanctuary splinters animal lovers and animal haters...
READ MORE ›

On Behalf Of The Family - A rich Turkish girl is found burned to death in a car arson fire at Santa Monica College, in...
READ MORE ›

Payback - A California mountain village explodes with the news of the beheading of a popular mayor. But we´re all such nice...
READ MORE ›

Rip-Off High-tech burglary and murder are bad for business in the upscale, tourist-destination beach city of Santa Monica with its...
READ MORE ›

No Dice A powerful gambling empire is steamrolling local opposition to build a high-rise casino complex on the shoreline of upscale Santa Monica...
READ MORE ›